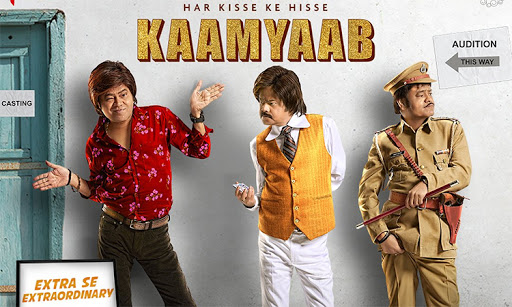 “Sardar maine aapka namak khaya hai!”. That one probably is one of the best-remembered dialogues from Indian movies. And it was not delivered by one of the leads of the film. Rather, the actor who delivered these words possibly had only these words in the whole script before he is bumped off by Gabbar.  The same film has another gem. Samba replying to Gabbar’s query about the bounty on his head. “Poore Pachaas Hajaar”.

And yet for an average viewer, it would not be unlikely to not remember the names of the actors who delivered these names. Sudheer, our protagonist in Kaamyaab, is pretty much in the same league. So much that he hangs out with Viju Khote (Kaalia from Sholay)! Maybe the table would have had Mac Mohan (Samba) too if he had not departed from this world a few years back. Sudheer has been a part of 499 movies, in which he played small parts and delivered lines that have gone on to become part of the pop culture. And yet when a teacher of his grandchild spots him, she identifies him but cannot quite recollect his name.

Of course, Sudheer has his fans too. The one-off movie geek, who not only knows his name but can also recollect details of his films and has his pictures from movies. The ones who acknowledge the work that actors like him put in. But let’s face it, even in movie reviews we are likely to talk only about the leads. In this case that would be Sanjay Mishra and not Avtar Gill! There is no reason why the larger audience should behave any differently. The whistles and claps are often reserved for the stars. And that’s the bitter truth that Kamyaab helps us swallow, albeit coated it in a sweetened dramedy. Such is life. “Aur option kya hai?”

In essence, Kaamyaab is a lovely tribute to the people who make the movies so much more memorable. Sudheer is the archetypical sidekick who has made so many movies so much more fun. And Sanjay Mishra plays the part as if he has known Sudheer all his life. Mishra, one of the finest talents we have in the movie industry today, for long has been exactly that. Sudheer. Remember, “Arre Dhondu Just Chill Be”? The actor has been working in movies for close to 30 years now and till quite recently probably did not get his names in the opening credits of a film. Sanjay breathes in life into Sudheer and you feel his excitement and then his pain. 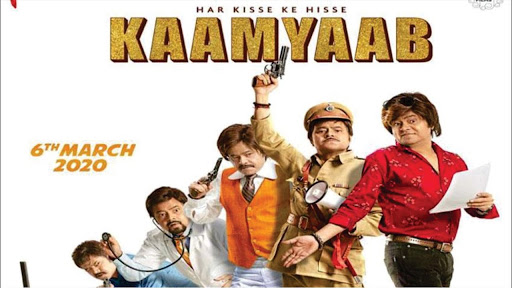 Kaamyaab is written well. It delves into the life of a has-been. An actor who has hung his boots and is now fading into oblivion unknown to the fact that he is just a day’s shoot at a film set from creating history – being a part of 500 movies! And when he is told the same, his life takes a complete u-turn. He fancies his chance to become a part of history – probably his last-ditch effort to make his name. Something that could tell people his name. Name – something that every artist lives for. But this is not going to be easy. Filmmaking has changed. And more importantly, the people in the business have changed.

Kaamyaab has enough to keep you hooked. And if at all there is a dull moment, Sanjay Mishra lifts it up with his zeal. Not to mention, the sidekicks. All of them, delivering parts that they have lived through their lives. Spot on. This is a special one for all of them. Liliput, Birbal, Ramesh Goyal, Guddi Maruti, Anil Nagrath. And of course, Viju Khote, whose memory the film is dedicated to.

The film offers a chance to reflect on something we don’t usually put much thought into. And it does beautifully with the name itself. ‘Har Kisse Ke Hisse’  literally meaning ‘a part of all stories’. Maybe this is the time we offer gratitude to all of them for making the stories so much more effective. After all, it is these stories that have entertained us, changed us… made us who we are in so many ways.

For me, the most defining moment of the film is the very last scene. Watch it.

Kaamyaab is available on Netflix.

Something awesome is in the works Dismiss